Games Workshop have been publishing books since the 1980’s and as with all publishers the quality has varied a lot. It seems that they are publishing a few new novels every month now and to be honest I don’t read the current crop. The books just aren’t aimed at me, I have no great interest in the Horus Heresy, to be honest it feels like every new book dispels a bit more of the myth that surrounded that calamity. Neither do I care that much about the official versions of 40k and Age of Sigmar, instead I prefer to create my own small stories within the AoS28 and Inq28 communities.

But that doesn’t mean that there doesn’t exist a few great gems from Black Library. They do have a knack for making some fun pulp short stories and some of the novels have been quite good. So here is my list of my favourite Black Library books. They are in no particular order and I have limited them to only one book per author. For the same reason I have not included any anthologies even if they are my favourite sort of Warhammer fiction, one author per book and each author only once.

The Talon of Horus by Aaron Dembski-Bowden

This was a bit of a strange choice to read for me, I had heard good things about Dembski-Bowden but his earlier output hadn’t really focused on anything I was really keen on reading. For some reason I picked up The Talon of Horus anyway, even if the main character seemed to be Abaddon the Despoiler, one of the most boring special characters in 40k. What a pleasant surprise it was! The characters are decently written, the plot is clear and the characters plan makes some sense. Sure it has its flaws but that is to be expected from any book. There is an eldritch light god, strange daemons, embittered characters and wonderfully macabre ideas. I’m not sure if or when I will read the sequel, but this was one of the best portrayals of the damned astartes of the fallen legions.

Brunner is an interesting character, he is in many ways a complete asshole. But it makes sense when we consider the world he lives in. The Warhammer World is not a place where the good guys survive, it is a place where an orc and a man wrestle over a swine only for a halfling to stab them both and steal the pig. So Brunner does what he wants to survive and thrive in this amoral place. He visits interesting places like Tilea and the Border Princes, going up against orcs, skaven, undead and humans, not to mention the followers of the Ruinous Powers. Through him we see how the Old World functions, not just the mighty heroes but the scum and the priests, the whores and the losers. This was something I deeply enjoyed.

I’m not a huge fan of special characters, to be honest they are for the most part boring. But I understand why they exist and I get the them. Origin stories are also something I don’t care too much about, I don’t need to know how Ferrus Manus acquired his iron hands (ha ha ha) or how Eisenhorn recruited his entourage. So again this is a book I didn’t expect too much from. But damn if it wasn’t a fun read! Bill King has a talent for combining the grotesque with a humorous touch, after all he is the man behind that scumbag duo of Felix and Gotrek. The way the Space Wolves, and certainly Ragnar himself, are portrayed is perhaps a tad too humane, but on the other hand the Space Wolves have always been a strange group so who knows, maybe it fits them.

Part Sherlock Holmes and part William of Baskerville, Zavant Konniger is a scholar, detective and inventor. His cases, for the time being incomplete, takes him to the darkness beneath and inside Altdorf, to a lonely monastery and he faces both the enemy within and without. Chaos runs rampant and the dead stalk the living. Unlikely allies are found in the undead and the criminal mastermind that controls the capital of the Empire. The cases are funny, dark and familiar, but with a clear Warhammer-esque feel to them.

Storm of Iron by Graham McNeill 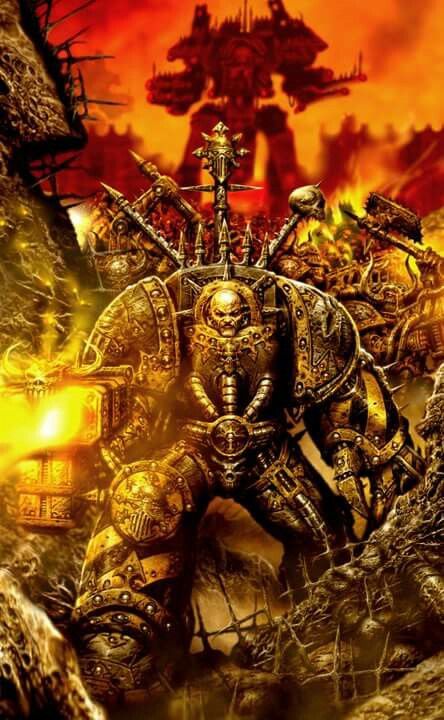 Storm of Iron is perhaps my favourite 40k book. Yes, it includes battle scenes, and so many battle scenes. But it is as dark as a winter night in the north and bleak as fuck. Grotesque in the best possible way. Imperial Fists, Iron Warriors, Titan Legions whack it out but it is the humans of the Astra Militarium that suffers the most, and how they suffer! Their plight and the callous attitude of the Terran Priesthood is a delight to read. They fight as well as they can but when daemons from the ancient past returns to terrorize them there can be no salvation, only degrees of damnation. Ancient Blood embraces its pulp roots and runs with it, the story is deeply anachronistic but I could not have cared less when it was so much fun. Filled with dark intrigue, surprisingly relatable characters and well crafted villains. The story focus upon the unfairly despised Strigany and their dark fathers and masters. Again we see a seldom shown part of the Warhammer World, a people that skulk in the shadows and fear both their past and present but long for a better future. The villains are those who prey upon the weak and hated, true darkness does not only fill the undead.

This, then was my selection, I can obviously recommend them all and I would love to hear which Black Library books you liked the most.

9 thoughts on “Black Library – My Favourites”